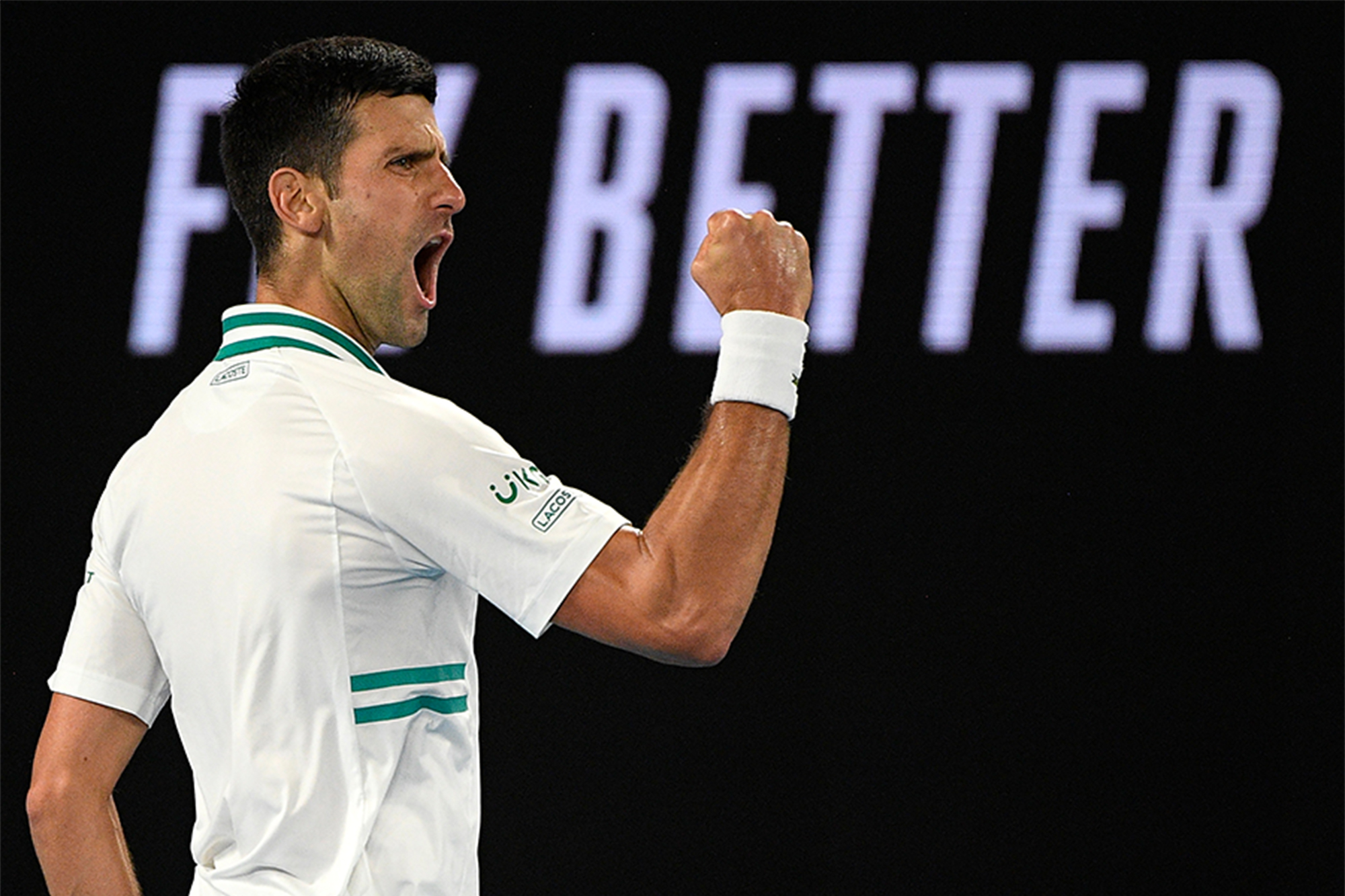 And he keeps gaining on Roger Federer and Rafael Nadal in the Grand Slam standings, now up to 18 overall, two away from the men’s record shared by his two rivals.

Djokovic used superb serving and his usual relentless returning and baseline excellence to grab 11 of 13 games in one stretch and beat a visibly frustrated Daniil Medvedev 7-5, 6-2, 6-2 on Sunday for a third trophy in a row at Melbourne Park.

The 33-year-old from Serbia improved to 18-0 combined in semifinals and finals on the hard courts of the Australian Open.

Looking at the bigger picture, Djokovic has won six of the last 10 major tournaments and is assured of remaining at No. 1 in the rankings at least through March 8. That will give him 311 weeks in the top spot, breaking a mark held by Federer.

The No. 4-ranked Medvedev was appearing in his second Grand Slam final — he was the runner-up to Nadal at the 2019 U.S. Open — but is still left trying collect his first such championship.

But going up against Djokovic in Australia is a much different challenge.

By the second set, as things slipped away, Medvedev bounced his white racket off the blue court, then absolutely destroyed it with a full-on spike. By the third, he kept looking up at his coach with palms up as if to ask, “What can I possibly do here?”

It is a familiar sentiment in this stadium, on this court, at this tournament. Federer, Nadal, Andy Murray, Stan Wawrinka, Dominic Thiem — all Grand Slam champions, all defeated by Djokovic in semifinals or finals in Melbourne.

So place the nine triumphs in Australia alongside five at Wimbledon, three at the U.S. Open and one at the French Open for Djokovic.

The math looks good for Djokovic. He is about a year younger than Nadal and 6 1/2 younger than Federer, who turns 40 in August. Federer hasn’t competed in more than a year after having two knee operations but is expected to turn to the tour next month.

On a cool, cloudy evening, an event delayed three weeks because of the coronavirus pandemic concluded with an announced attendance of 7,426 at Rod Laver Arena. Spectators were barred entirely for five days earlier in the tournament because of a local COVID-19 lockdown, but they eventually were let back in at 50% capacity.

A majority favored Djokovic on Sunday, so plenty of choruses of his nickname rang out — “No-le, No-le, No-le!” — and Serbian flags dotted the stands, flapping in a swirling breeze.

Medvedev’s flat, wrap-the-racket-around-his-neck forehand was iffy at first, missing wide, long and into the net in the initial 10 minutes. Djokovic grabbed 13 of the match’s initial 16 points and a quick 3-0 lead.

Soon enough, though, it was 3-all, because Medvedev cleaned up his mistakes, while Djokovic faltered a bit, getting broken after a game in which he flubbed a drop shot, then an overhead, the most glaring — only? — weakness in his game.

But from 5-all, Djokovic stepped up, and Medvedev stepped back. Djokovic held at love, then broke to claim the set when Medvedev slapped a forehand into the net just after someone in the crowd called out during the point.

There were frequent extended exchanges at the baseline, both men capable of covering the court well enough to swallow up each other’s potential point-ending shots. Medvedev rarely strayed from the back of the court unless lured forward by one of Djokovic’s relatively frequent drop shots.

Djokovic began the second set with a fault into the net, then shook out his left arm and flexed his shoulders. That point ended with him missing a backhand into the net, and he hunched up his shoulders and stared over at his guest box. Another netted backhand gifted Medvedev a break and a 1-0 lead.

Signs of trouble? Not for long.

There might have been reason to believe Djokovic was just a tad more susceptible this time around.

First of all, he wrenched his midsection during a slip in the third round against American Taylor Fritz; after that win, Djokovic said he had torn a muscle, but by the time he played his semifinal, he declared himself pain-free.

Plus, entering Sunday, Djokovic already had ceded five sets through six matches, the most he had dropped in any Grand Slam tournament en route to a final.

This was his 28th major final, even with Nadal for the second-most by a man in tennis history, trailing Federer’s 31.

The extreme experience gap certainly seemed to show. One example: Medvedev immediately gave back that early break in the second set by relinquishing two of his own service games back-to-back.

Djokovic broke in half of Medvedev’s 14 service games, won 73% of the points when his own first serves went in and 58% on seconds. And Djokovic played so cleanly, with just 17 unforced errors; Medvedev made 13.

When it ended, after fewer than two hours, Djokovic dropped to his back on the court, limbs splayed. He has said he feels at home at the place, and he isn’t ready to relinquish ownership.

Cloris Leachman’s cause of death was a stroke

Marjorie Taylor Greene gets into office spat over LGBT flag

Carson Wentz isn’t getting No. 11 from Colts’ Michael Pittman Jr.

A new breed of firms vie for stake in NBA teams