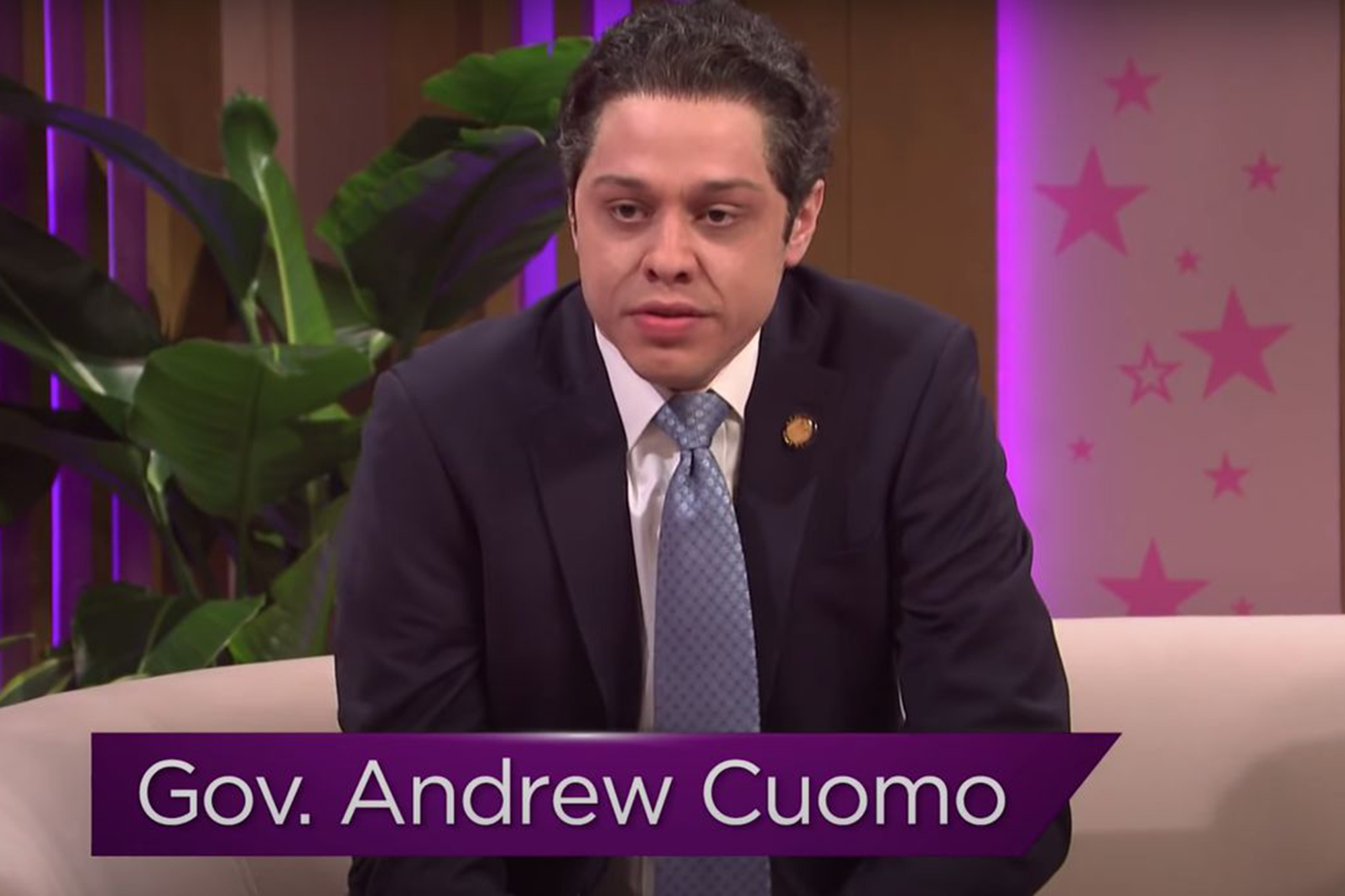 The pair of pols were both supposed to apologize to Chloe Fineman’s Britney Spears on a show called “Oops, You Did It Again” — with Cuomo’s notorious rage instead replacing any regrets.

Davidson’s Cuomo initially even tried to ignore the nursing home scandal entirely, pretending he thought he was on the show for the “exciting” news that “indoor dining is back in New York!”

After being admonished by Spears, Davidson’s Cuomo finally looked downcast as he conceded, “It’s because of the … nursing home stuff.”

He then insisted inaccurate reporting of seniors’ COVID-19 deaths in New York was no different than “what happens at Disney World” — suggesting the theme parks “move the bodies” to pretend that people who die on rides actually passed outside the park.

“So we just did the Disney thing,” the fake Cuomo said innocently.

Pulled up again by Spears, the fake Cuomo eventually did what the real one seems unable to do and apologized, albeit it angrily.

“Yeah. I said I was sorry!” he barked — before snapping into a rage at the mention of Mayor Bill de Blasio’s name.

“What did that bird b—h say about me?” he asked, saying he would “bury him in the tallest grave this city has ever seen.”

He even got angry when Cruz — who had appeared happy about his own scandal of jetting off to Mexico during his state’s blackout crisis — tried to compare them as “both strong misunderstood men.”

“Do not associate yourself with me. We are not the same. I am a man, you are a clown,” Davidson’s Cuomo snapped.

“If you mess with me, I will send you to a clown hospital. And when you die, I will not count your body,” he warned.

Bryant’s Cruz had walked into the show’s set with beads in his hair and wearing a “Cancun Family Vacation 2021” T-shirt, carrying a tropical drink in one hand and pulling a rolling suitcase with the other.

“Hola everyone. I’m not tan — I just cried myself red over my fellow Texans. And that’s why I drink in their honor,” he said with a smile.

“I’m in a little bit of hot water, which I am told is a thing no one in Texas has,” Bryant’s Cruz told Spears.

“I deeply regret my actions over the last couple of days … most flying United,” he joked. “I’m sorry — I am pretty bad at human stuff,” he said of his lame joke.

Asked about being dubbed a coward for abandoning his home state during its historic crisis, the pretend Cruz said, “Yeah, a ‘coward’ is actually the nicest word I heard.”

Cuomo was not the only guest furious at Cruz trying to liken himself to them, with axed “Mandalorian” star Gina Carano — played by Cecily Strong — calling him “coach” to her “first class.”

“If you compare yourself to me, I will blast you to the farthest desert of Tatooine,” the pretend Carano told Cruz — just for him to reply, “Anything to get out of Texas.”

Carano insisted she had nothing to apologize for over her social media posts that compared the plight of modern-day conservatives with Jews in Nazi Germany.

“I never would have made that Nazi comparison if I had known everyone was going to be a Nazi about it,” the pretend Carano replied.

How Is the Fed Thinking About Unemployment?

‘We Will Do Better,’ Postmaster Tells House Lawmakers

Dustin Johnson clear No. 1 golfer in every possible way

George Clooney Talks About His Love For Amal, And It’s Devastatingly Romantic